ashok mahindra retired from the accounting profession in 2008 after a career of nearly 40 years.He now supports wildlife and nature conservation through the Hem Chand Mahindra Foundation and is also a wildlife photographer. He lives with his wife Manju, in Delhi,Mumbai and Goa. 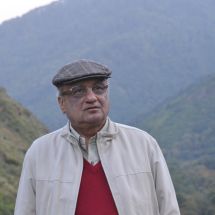 
as a former Treasurer and Vice-President of WWF,India he became aware of the urgent need for the preservation of wildlife and its habitat.It was only after his retirement that he was able to get seriously involved in issues relating to conservation and wildlife photography.He has travelled widely in India to numerous national parks and sanctuaries in the pursuit of his passion and the conservation cause.He has travelled from the Hollonggapar Gibbons Sanctuary in Assam in the North East to photograph the only ape in India -the Hoolock Gibbon- to Valparai in Tamil Nadu to photograph the endangered Lion-Tailed Macaque.

from these travels he has seen how the entire ecological system is fragile and seriously threatened.As a photographer his endeavour is- through the medium of photographs-to get people to care for the threatened species before it is too late.

ashok set up the Hem Chand Mahindra Foundation(HCMF) in 2012 to support conservation and wildlife efforts in India.The Foundation is currently involved in the Kaziranga,Bharatpur & Ranthambhore landscapes.

ashok came out in May 2015 with his first coffee table photo book titled "Capturing Wildlife Moments in India",published by BNHS & Oxford University Press(OUP).

ashok,has travelled widely in India & abroad,particularly to Europe and East Africa together with his Nikon cameras and lenses.He has attended small group photography courses at Cortona Center of Photography,Tuscany,RAWdigital Photography Workshops at Lorgues,Provence,France & Montefiascone,Italy,Susan Porter Photography at Marrakesh,Morocco and Marco Secchi Photography at Slovenia.

look around his gallery to view a selection of some of his favourite wildlife & travel photographs.
Next
Previous